Walnut is the common name given to twenty species of deciduous trees in the genus Juglans, of which six species are native to the United States. The black walnut, Juglans nigra, which is native to Virginia, grows from Maine west to southern Michigan and south to Texas and Georgia.

Black walnut is the tallest of the walnuts, with the potential to reach 100 feet. The compound leaves of walnuts are spaced alternately along the branches. Each leaf is divided into an odd number -- usually from 7 to 23 -- of small yellowish green leaflets. Walnuts are monoecious, with male flowers borne in long, unbranched, drooping catkins and female flowers borne singly or in short spikes. The walnut fruit is a nut, borne singly or in pairs, and enclosed in a solid, non-splitting green husk. The edible, oil-rich nut kernal is enclosed in a thick, hard, ridged, black shell. Black walnut heartwood is heavy, hard, strong, and durable, with a chocolate-brown color prized by furniture manufacturers and many other industries.

Though grown primarily for its wood and nuts, black walnuts are often found growing on landscape sites where they serve primarily as shade trees. When certain other landscape plants are planted near or under this shade tree they tend to yellow, wilt, and die. This decline occurs because the walnut tree produces a non-toxic, colorless, chemical called hydrojuglone. Hydrojuglone is found in leaves, stems, fruit hulls, inner bark and roots. When exposed to air or soil compounds, hydrojuglone is oxidized into the allelochemical juglone, which is highly toxic. 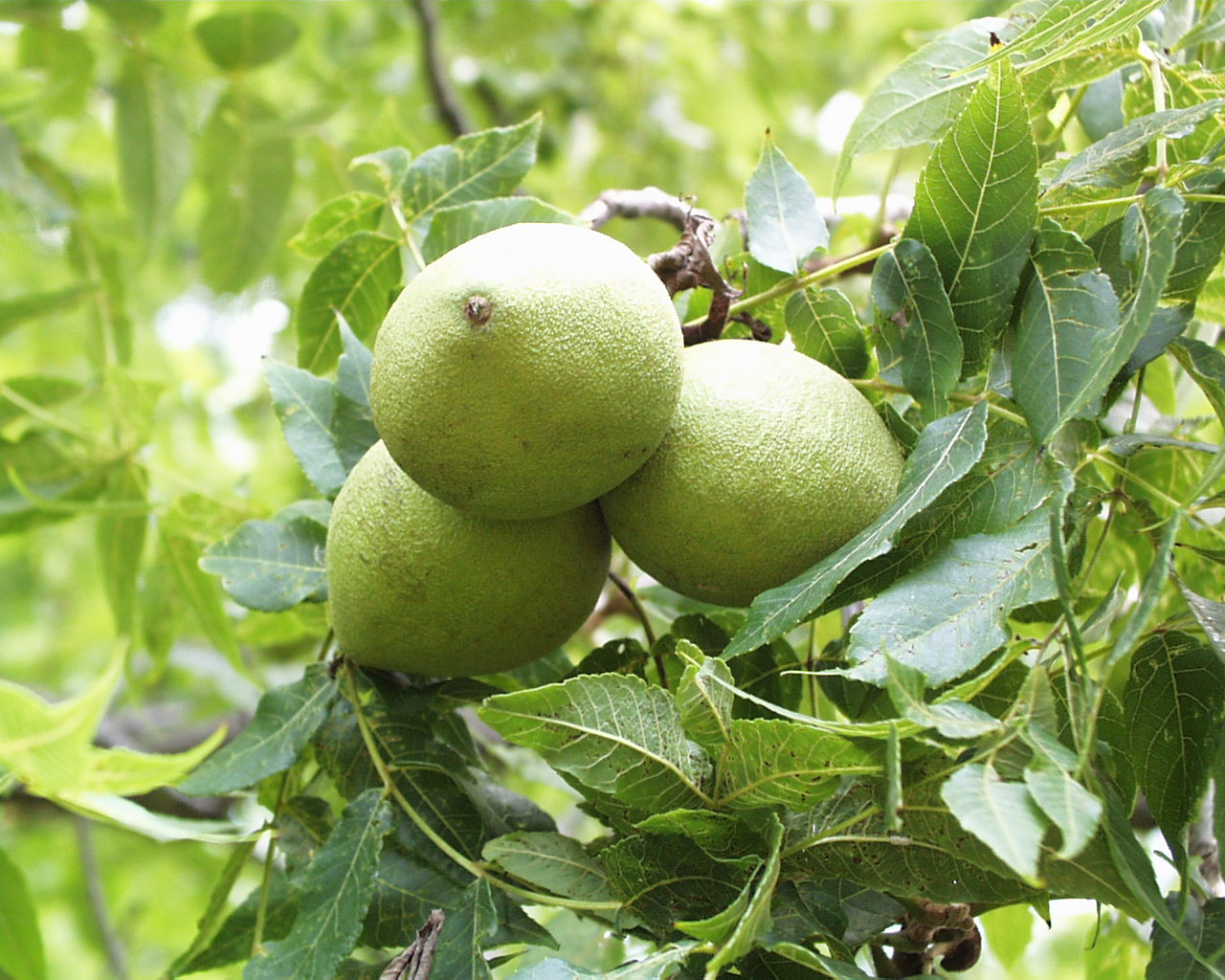 Juglone is exuded from all parts of the walnut tree. Juglone can affect other plants either through root contact, leakage or decay in the soil, falling and decaying leaves, or when rain leaches and drips juglone from leaves and branches onto plants below. Plants located beneath the canopy of walnut trees are most at risk because juglone from the roots and fallen leaves accumulates there.

Although juglone has low water solubility and does not move far in the soil, small amounts may be injurious to sensitive plants. Plant roots can encounter juglone when they grow within 0.5 - 0.25 inches from a walnut root. Walnut roots can extend in the soil well beyond the crown or drip line of the tree, affecting susceptible plants far from the black walnut.

The accumulation and depletion of toxins in the soil is affected by factors such as soil type, drainage, aeration, temperature and microbial action. Soil microorganisms ingest allelochemicals as energy sources, and metabolic decomposition can render the chemicals non-toxic to plants. When soils are well drained and aerated, a healthy population of aerobic microorganisms can accelerate this process.

Wet, poorly aerated soil, very common in many urban areas, discourages microbial growth. Plants sensitive to the walnut tree's toxic effect may be at a higher risk when planted in heavy urban soils that lack organic matter. Toxins adhere to organic matter rather than being absorbed by plants, and organic matter also encourages a healthy soil microbial population.

Mycorrhizal fungi are commonly associated with forest tree roots and are considered necessary for normal uptake functions. Allelochemicals can disrupt the uptake process by damaging the root hairs or by inhibiting mycorrhizal populations in the soil. These different soil factors all have an effect on the accumulation or depletion of juglone produced by the black walnut tree.

There are ways to reduce allelopathic effects from walnut trees.