Landscape gardening is not without pitfalls. While we are mostly looking to protect our plants from problems sometimes we need to look out for ourselves. Poison ivy and mosquitoes are troublesome but nothing seems to put the fear of nature into most folks like the site of a tick crawling on your body. This fear is justified as ticks can carry dangerous diseases. A little knowledge can go a long way to preventing ticks from becoming serious problems.

The four most common ticks in Virginia that are encountered by humans are the lone star tick, the American dog tick, the brown tick, and the blacklegged tick or deer tick as it is sometimes called. The lone star tick is found predominately east of the Blue Ridge Mountains. The American dog tick is found predominately west of the Blue Ridge Mountains. The brown dog tick can be found throughout Virginia but tends to be uncommon. The blacklegged tick is uncommon also and is found primarily in the northern and eastern sections of Virginia.

The brown dog tick is not known to carry any disease in Virginia. Both the lone star tick and the American dog tick are potential carriers of Rocky Mountain Spotted Fever. The blacklegged tick is a potential vector of Lyme disease and has been implicated in the transmission of ehrlichiosis. In any case of suspected tick transmitted disease, consult with a physician.

A tick needs to be attached for four to six hours in order to transmit Rocky Mountain Spotted Fever to its human host. The first symptoms noticed are usually severe headache, chills, fever, muscle aches, nausea, vomiting, and other flu-like symptoms. These first symptoms usually start 2 to 12 days after the tick bite. By the third day after the bite, a red rash develops on the wrists and ankles, in most cases, and often spreads to the entire hand or foot. A blood test is needed to confirm the disease, and early use of antibiotics has a very high rate of cure.

Lyme disease initially develops as an oblong rash, usually 2 or more inches in size, with a clear center that develops at the site of the tick bite, although only 70% of people develop this symptom. At a later time people usually develop flu-like symptoms such as nausea, headache, fever, and general stiffness of the neck joints. Chronic symptoms of a small percentage of untreated people include arthritis and nervous system complications. 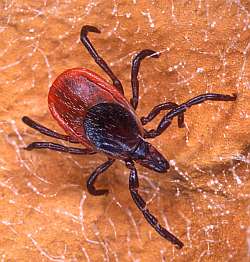 Ticks pass through three feeding stages: the larva, nymph, and adult. Typically, each stage feeds on a different host. Hosts include a variety of animals (e.g., mice, rabbits, and deer), and each stage of the tick has a different host depending on the life stage. Humans are accidental hosts that are not part of the natural life cycle of the tick. After feeding on a host, a tick becomes engorged with blood and drops from the host. Once in a protected place, immature ticks molt to the next stage, and adult females produce eggs after their final blood meal.

The Virginia Department of Health recommends the following methods of prevention.

Ticks are best removed with tweezers or by wrapping the tick in tissue paper and pulling out with fingers. Do not twist or jerk, and pull slowly to avoid leaving the mouthparts in the wound. Do not use nail polish, petroleum jelly, alcohol, or hot matches to remove the tick. Wash the wound with an antiseptic after the tick is removed. Kill the tick in rubbing alcohol and keep it in a small vial for a few months in case any disease symptoms develop.