If you grow vegetables, fruits, or simply observe nature around you there will come a time when you see stink bugs. There are over 200 species in North America and they are very common and well-known. Most are plant feeders but some are predators and of course they would not have that name unless someone thought they stink. Their odor is produced by a liquid released through openings on the underside of the thorax when they are disturbed.

Stink bugs are in the insect Order Hemiptera, or true bugs, and the insect Family Pentatomidae. All of the insects in this order have certain characteristics such as piercing-sucking mouthparts and wings that are membranous and overlapping at the tips but hardened at the base. They are distinguished from the similar looking beetles in that beetles have chewing mouthparts and front wings that are uniform in texture and do not overlap. The family name tells you they have five sides and they also have a distinctive shield shape, five segmented antennae, and a large triangular shaped plate called the scutellum right in the middle of their backs. This description fits the adult stink bugs primarily although the nymphs are similar in shape only without fully developed wings. The eggs of stinkbugs are barrel-shaped and laid in masses that are easily seen on the back of leaves of their host plants. Shortly after hatching nymphs are gregarious and stay near their eggs. As they develop they begin to feed and disperse.

Stink bugs feed on many different plants, including native and ornamental trees, shrubs, vines, weeds, and many cultivated crops. The preferred hosts are nearly all wild plants. Stink bugs build up on these hosts and move to our preferred plants later in the season as their preferred foods mature. Economically important species include the Harlequin Bug (Murgantia histrionica) on cabbage and other cruciferous plants and the Green Stink Bug (Acrosternum hilare) which damages fruit trees, cotton, corn, soybean, and other crops. Both adults and nymphs are capable of damaging plants. They insert their piercing-sucking mouthparts into the plant, inject digestive enzymes, extract plant juices, and allow entry of pathogenic microorganisms. Beneficial stink bugs such as the commonly seen spined soldier bug (Podisus maculiventris) feed in a similar way only on other insects. One distinction is that those who feed on other insects need stronger, stouter beaks and muscles to penetrate their prey while plant feeders can use less effort and more precision in their feeding. Plant feeders tend to prefer the seed of plants when they can get them and this is the most damaging sort of feeding when they attack the developing fruiting structures. Significant yield reductions can be seen in many crops if they are not managed well.

Stink bugs overwinter as adults and become active in spring when temperatures rise above 21 degrees Centigrade (above 70 degrees F). Each female may deposit up to several hundred eggs, usually in mid- or late June. These eggs are laid in clusters (averaging 36 eggs) primarily on leaves and stems. Nymphs hatch from these eggs and pass through five instars or stages before becoming adults. Approximately five weeks elapse between hatching and adult emergence. Two generations per year occur in warmer areas while only one generation per year has been reported in Virginia. In any case, stink bugs generally reach high population levels in late September or early October. 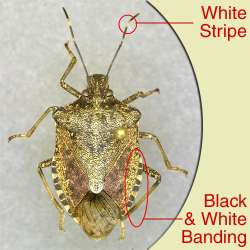 In 2001 a new exotic species, the brown marmorated stink bug (BMSB), Halyomorpha halys, was identified in Allentown, Pennsylvania. This Asian native has since been found in New Jersey, Maryland, and West Virginia. This species is a known pest of fruit trees and legumes in China, South Korea, Japan, and Taiwan. As is common with introduced pests, these are suspected to have entered the U.S. in packing crates from Asia. The BMSB has a long list of host plants including many fruit and shade trees, other woody ornamentals as well as legumes and various vegetables. Human activity will no doubt help them spread as they hitchhike on vehicles as we move about. Surveys continue to monitor for this pest and estimates are that it will increase its range throughout the northeastern states. Since it feeds on many common landscape ornamentals homeowners will probably be the first to see it.

This particular species is identified by dark mottled brown color, the last two antennal segments have alternating light and dark bands, and exposed abdominal edges also have alternating dark and light banding. If you suspect you have encountered the BMSB, please collect specimens and bring them to me for identification before you take any action.