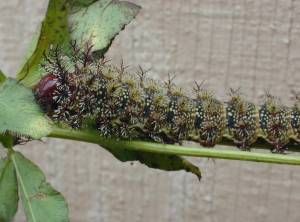 While I was checking my bluebird house this week to see how the chickadees were doing I looked up above my head at a dark mass hanging at the end of a white oak branch. It was only a few young caterpillars but I felt lucky to see them before I bumped into them for they were buck moth caterpillars.

Often it happens like this. You are pruning your shrubs or reaching into a tree to remove some webbing or dead leaves. It is a familiar scene that you have been through before without incident. Then you feel it, a burning, stinging sensation. Something got you but where is it? No bees or wasps around so you look closer at the foliage and sure enough you find caterpillars. They are usually colorful, always spiny, sometimes very small, stinging caterpillars.

The majority of ferocious looking caterpillars are completely harmless. There are, however, six rather common species in Virginia with poisonous hairs or spines. These urticating hairs are hollow and connected to underlying poison glands. Contact with them causes a burning sensation and inflammation that can be as painful as a bee sting. The irritation can last for a day or two and may be accompanied by nausea during the first few hours. Specific symptoms vary depending on the species of caterpillar and the susceptibility of the victim, but usually the site of contact reddens and swells much like a bee sting or the affected area may appear as a small red rash.

A person "stung" by a poisonous caterpillar should immediately wash the affected area to remove any insect hairs and poison that remain. An ice-pack will help reduce swelling, and creams and lotions containing steroids will lessen the discomfort and promote healing. People with persistent symptoms lasting after the sting and people known to be sensitive to insect stings should consult a physician.

Most stinging caterpillars are general feeders and are commonly found on shade trees and ornamental shrubs in late summer. The six species common in Virginia are the saddle-back caterpillar, puss caterpillar, hagmoth, hackberry leaf slug, io moth, and buck moth.

The saddle-back caterpillar is about an inch long and has poisonous spines on four large projections (tubercles) and many smaller ones that stick out from the sides of its body. The "saddle" consists of an oval purplish-brown spot in the middle of a green patch on the back. Saddle-back caterpillars feed on the leaves of basswood, chestnut, cherry, plum, oak, and other trees and shrubs.

The puss caterpillar also is about an inch long and completely covered with long, silken brownish hairs. Hidden among the hairs are short, poisonous spines. Puss caterpillars are commonly found on hackberry, elm, plum, sycamore, oak and rose.

Hagmoth larvae are extremely bizarre in appearance. They are covered with short, dark brown hairs and have nine pairs of fleshy appendages, some of which are long and twisted. Rose, sassafras, alder, and spirea are among their favorite hosts.

The Hackberry leaf slug grows to about an inch long and has six small tufts of hair on each segment. Its body is off-white with a large purple patch on the back. Hackberry leaves are its preferred food.

A mature io moth caterpillar may be up to 2 1/2 inches long. They are a beautiful pale green color with white and red stripes on the sides. Short spines radiate from numerous tubercles on the back. These larvae feed on alder, ash, birch, cherry, elm, locust, oak, sassafras, and other deciduous trees and herbaceous plants. They are not uncommon in corn fields.

Stinging caterpillars rarely occur in sufficient numbers to be considered plant pests, but people who work with ornamental plants should learn to recognize them and avoid touching them.

If control is desired check with your local Extension office for current insecticides labeled to control these caterpillars.