After a flush of spring growth your shrubs may be looking like they need a haircut or maybe you can no longer see out of the window because they are too tall. Unless we are talking about the Forsythia hedge you put in to screen out your neighbors shed/truck graveyard/fill in the blank, sooner or later your shrubs will need to be pruned. The important things to understand are what do your shrubs want to look like and how can you influence this behavior without killing them or chopping off the blooms before you can enjoy them. 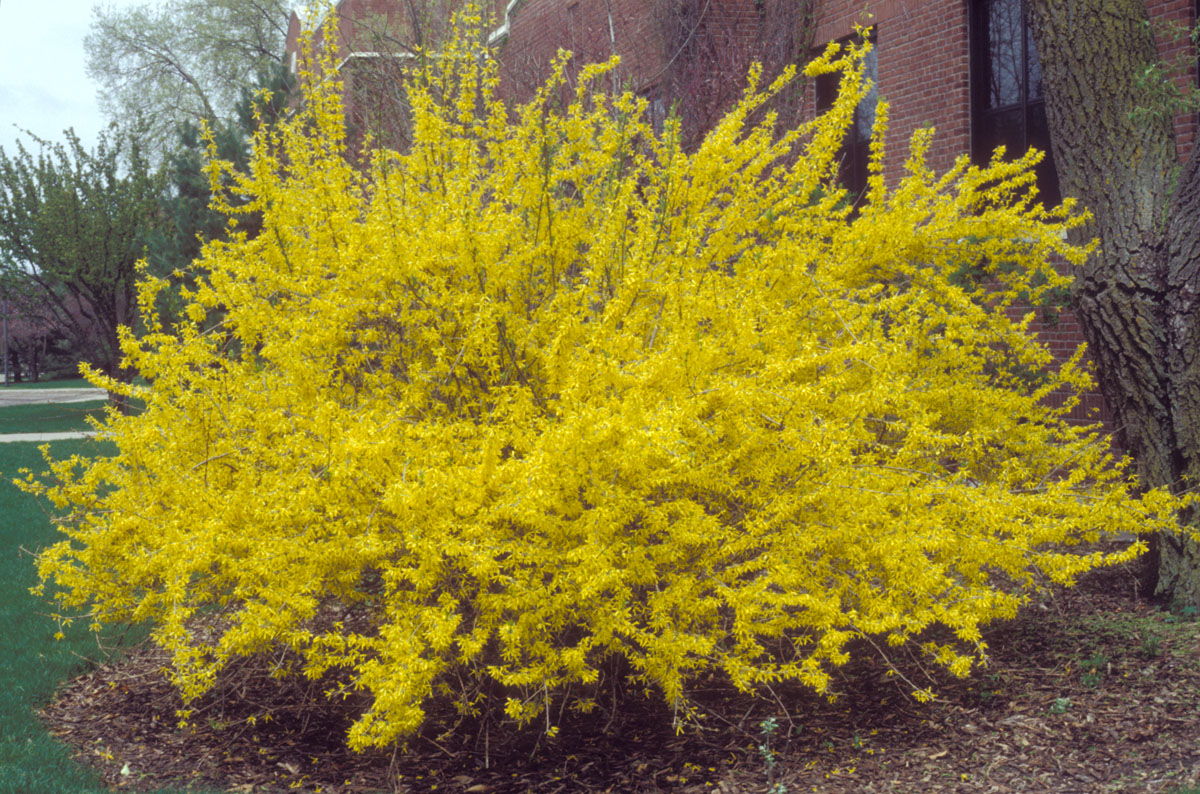 A photo of a forsythia.

Understanding the natural "habit" or shape of shrubs will help you determine how to prune them. All shoots grow outward from their tips. Whenever tips are removed, lower buds are stimulated to grow. Buds are located at nodes, where leaves are attached to twigs and branches. Each node produces from one to three buds, depending on shrub species.

Shrubs have mounding, cane, or tree-like growth habits. Those with mounding habits, such as evergreen azalea and Spiraea, generally have soft, flexible stems, small leaves, and are often used in mass plantings.

Shrubs with cane habits include Forsythia and Nandina. These shrubs spread by sending up erect new branches, called canes, from their base.

There are two basic types of pruning cuts: heading cuts, and thinning cuts. Heading cuts stimulate growth of buds closest to the wound. The direction in which the top remaining bud is pointing will determine the direction of new growth. Make heading cuts selectively to reduce shrub height and retain natural form. Non-selective heading cuts made indiscriminately will stimulate rapid regrowth from buds below the cut. These vigorous shoots are unattractive and make shrubs bushier, but not smaller. Non- selective heading cuts are only justifiable when using hedge clippers on a hedge or topiaried shrub.

Make pruning cuts correctly. For heading cuts, prune 1/4 inch above the bud, sloping down and away from it. Avoid cutting too close, or steep, or the bud may die. When pruning above a node with two or more buds, remove the inward-facing ones. Make thinning cuts just above parent or side branches and roughly parallel to them.

Do not coat pruning cuts on shrubs with paint or wound dressing. These materials will not prevent decay or promote wound closure.

Deciduous shrubs require maintenance pruning to keep them healthy and in scale with their surroundings. Maintenance pruning practices should begin at the time of planting, or after rejuvenation of older shrubs.

Always remove dead, diseased, or broken branches promptly. When pruning dead or diseased branches, make thinning cuts into healthy wood, well below the affected area. Disinfect tools between each cut with products such as "Lysol," "Listerine," or rubbing alcohol. Tests have shown that "Pine-Sol" and household bleach are highly corrosive to metal tools.

To reduce the height of shrubs with a cane habit, first remove the tallest canes by cutting or sawing them out near ground level. Then, thin out any canes crowding the center, as well as those growing in an unwanted or unruly direction.

For height maintenance of mounding-type shrubs, prune only the longest branches. Make thinning cuts well inside the shrub mass where they won't be visible. This method reduces mounding shrubs by up to one-third their size without sacrificing their shape.

Shrubs with a tree-like habit are the most difficult to shorten. After removing any rubbing branches, prune to open up the center of the shrub. Keep the crown open and maximize light penetration by careful use of thinning cuts. Prune branches that touch the ground and suckers originating from the roots. Wait until the very end of the job to make any heading cuts. Tree-like shrubs can usually tolerate removal of one-eighth to one-fourth of their branches.

Older shrubs often grow out of proportion with their surroundings, and may have large amounts of unproductive wood. Two techniques are used to restore old shrubs, provided they still have sufficient vigor and are growing in a favorable location. Keep the following in mind with rejuvenation pruning:

The first technique involves complete removal of the entire plant 6-10 inches above the ground. Use heavy lopping shears and a pruning saw. Remove half of the new canes that develop by mid- summer, and head back some of the remaining canes. When using a heading cut, be sure to prune to outward-pointing buds so that the inner portion does not become too dense. Shrubs that tolerate extensive rejuvenation are: Abelia, dogwood, honeysuckle, Hydrangea, lilac, mallow, rose-of-Sharon, Spiraea, and St. John's wort (Hypericum).

The second technique for shrub rejuvenation removes growth more gradually. The first year, remove one-third of the oldest, unproductive branches. The next year, take one-half of the old, lingering stems. Finally, in the third year, prune out the remainder of the old branches. New, productive stems should quickly replace the old wood. This method takes longer to complete, but the shrub stays more attractive throughout the rejuvenation period.

Pruning at different seasons triggers different responses. Late winter or early spring, before bud break, is usually the best time to prune many species because new tissue forms rapidly. However, pruning should be delayed for most spring-blooming shrubs until immediately after flowering to avoid reducing the floral display.

Summer pruning tends to suppress growth of both suckers and foliage. Summer-blooming shrubs should be pruned in early spring prior to bud set, or in summer immediately following flowering.

Late summer or early fall pruning causes vigorous regrowth, which in some cases may not harden off by winter, leading to possible cold damage. Whenever unexpected damage from vandalism or bad weather occurs, prune at once.

In case you are looking to buy some new plants you might check out the spring plant sales at your neighborhood garden centers, farmers markets, and volunteer fund raisers. Three upcoming events of the latter variety are put on by our own Master Gardener Volunteers in Charlottesville (May 3 Meadowbrook Shopping Center) and Nelson County (April 27 Rockfish Valley Ruritan Park) and the Virginia Native Plant Society (April 27 Ivy Creek Natural Area).