In the winter insects are not as commonly seen as they are in the warmer months. One group of insects that gets some recognition at this time of year is the scale insects. These insects do not hide in leaf litter or under the soil so much as some insects are prone to do. Rather they stay pretty much right where they were in the summer although they are less active. They can be revealed by lack of foliage for now but often we find them when plants are doing poorly and we are curious to find out why. 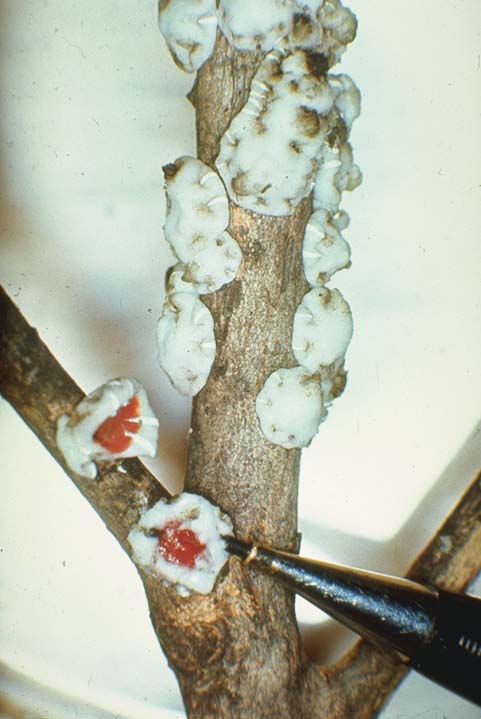 A photo of photo of wax scale insects.

Scale insects are a peculiar group and look quite different from the typical insects we encounter day to day. Small, immobile, with no visible legs or antennae, they resemble individual fish scales pressed tightly against the plant on which they are feeding. There are over l50 different kinds of scales in Virginia. Many are common and serious pests of trees, shrubs, and indoor plants.

Scale insects feed on plant sap. They have long, threadlike mouthparts (stylets) six to eight times longer than the insect itself. Feeding by scales slowly reduces plant vigor. Heavily infested plants grow poorly and may suffer dieback of twigs and branches. Occasionally, an infested host will be so weakened that it dies.

Adult scales are protected from insecticides by waxy coverings. Control measures, therefore, must be aimed at the unprotected immature stage (crawlers) or the overwintering stage. Dormant or horticultural oils are effective on the overwintering stage of most species. During the summer, the most effective control requires accurate identification of the pest species so that hatching dates of crawlers can be determined. Once the pest is identified and proper timing known, any one of several common insecticides can be used. Consult your local Extension Agent for current insecticide recommendations.

Scale insects can be roughly divided into two groups: armored scales and soft scales. Armored scales are so named because they secrete a protective cover over their bodies. Most species overwinter as eggs beneath the female cover. In spring, eggs hatch into tiny mobile crawlers which migrate to new feeding sites. After a few days, crawlers settle, insert their mouthparts, and begin feeding. Soon they secrete a protective cover and lose their legs. Large populations can build up unnoticed before plants begin to show visible symptoms. Our most common armored scale pests include the euonymus scale (Homoptera: Diaspididae, Unaspis euonymi (Comstock)).

Female euonymus scales are pear-shaped and blackish-brown. Males are elongate and white. This is a common and serious pest of evergreen euonymus, often causing defoliation and dieback. Pachysandra and bittersweet are also suitable hosts. There are two generations per year. Crawlers are active May 5-June l0 and August l-25. When required, four treatments are recommended: May l0 and 20, and August 5 and l5.

In general, soft scales are larger and more convex than armored scales. Many resemble miniature tortoise shells. Soft Scales usually cover themselves with wax, but they lack the detachable protective cover for which armored scales are named. Most soft scales overwinter as immature, fertilized females. In spring they resume feeding, mature, and lay eggs. These hatch into tiny crawlers. After locating suitable feeding sites, crawlers settle and begin feeding. Some species lose their legs once they are settled, but others retain them and are able to crawl short distances to find suitable overwintering sites in the fall. Except for soft scales which infest indoor plants, most have only a single generation per year at our latitude.

Our most common soft scale pests include the cottony camellia scale (Homoptera: Coccidae, Pulvinaria floccifera (Westwood)). One generation is produced each year and they overwinter as nymphs on twigs mostly. The mature female is a tan, slightly convex, 3mm long oval. She lays her eggs in a white fluted sac on the underside of a leaf and then dies and falls to the ground. Each egg sac (5-10mm long) contains up to 1000 eggs and begins hatching in early June. Crawlers settle on leaves soon after and suck sap, causing off-color, light green foliage damage. Host plants include camellia, holly, yew, rhododendron, Japanese maple, hydrangea, English ivy, mulberry, and euonymus. Treatments, if needed, are recommended in mid June while the crawlers are still active. Low toxicity pesticides such as horticultural oil and insecticidal soap can be effective for most scale insect pests.