If you thought black spot was the worst disease your roses could get, think again. Rose rosette disease (RRD), a disease believed to be caused by a virus, has been spreading through much of the wild rose population of the Midwest, South and Eastern United States for years, and was confirmed in cultivated roses in Virginia around the turn of the century. This disease is of concern to the nursery industry and many home gardeners because it is known to be lethal to the wild multiflora rose (Rosa multiflora) and many ornamental rose species and cultivars. 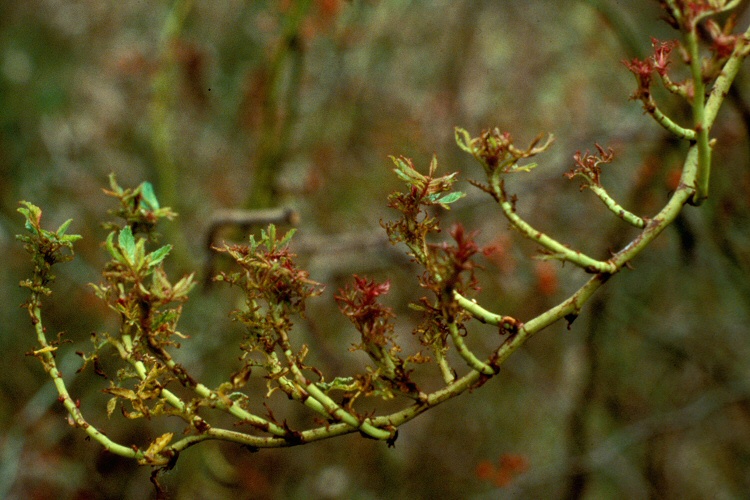 A photo of rose rosette disease.

Symptoms of rose rosette disease are highly variable, depending on the species or cultivar of rose affected. This variability can complicate diagnosis. Some of the more recognizable symptoms include rapid elongation of new shoots followed by development of witches brooms or clustering of small branches. Leaves in the witches broom are small, distorted, and may have a conspicuous red pigmentation, although red pigmentation is not a consistent symptom. Canes on some species or cultivars develop excessive growth of unusually soft and pliable red or green thorns. When this symptom is present, it is diagnostic for rose rosette disease. Symptomatic canes may also be noticeably thicker than the parent cane from which they emerged or they may grow in a spiral pattern. Flowers may be distorted with fewer petals than normal and flower color may be abnormal. For example, flowers that are normally a solid color may be mottled. Buds may abort, be deformed, or be converted to leaf-like tissue. Infected rose plants often die within one to two years.

Other symptoms that may be expressed include blackening and death of the canes on some cultivars, short internodal distances, blind shoots (shoots that do not produce a flower) that remain blind, and greater sensitivity of reddish purple tissue to frost. Leaves of diseased plants may have a roughened, pebbly texture. Plants with RRD also have increased susceptibility to the fungal disease, powdery mildew. This is especially evident when nearby roses known to be highly susceptible to powdery mildew do not develop signs of this disease.

Symptoms that were undoubtedly due to rose rosette disease were described in the United States as early as 1941. Spread of the disease in the United States was intimately tied to the history of the multiflora rose, an exotic plant that was introduced from Japan in 1866 as a rootstock for ornamental roses. During the 1930s through 1960s, planting multiflora rose was recommended for erosion control, as a bird sanctuary and food source, as a living fence for cattle, for strip mine reclamation, and as a crash barrier on highways. This recommendation ultimately backfired. Multiflora rose can produce a million or more seeds per plant and can propagate itself vegetatively as well. It quickly spread and is now declared a noxious weed in several states.

The causal agent of rose rosette disease is not soil-borne, so it is possible to successfully plant healthy roses in beds where diseased plants have been removed; however, the pathogen may persist in old root pieces that remain in the soil from previous diseased roses. If plants regrow from these old root pieces, as multiflora rose is apt to do, they can serve as an inoculum source for healthy plants. Therefore, it is important to remove old plants thoroughly and ensure that infected plants are not allowed to regrow from old, infected root pieces.

No effective control is available for rose rosette in existing, diseased rose plants, but the disease may be prevented from spreading to healthy plants by using a combination of the following approaches.

Early detection of the disease is the key to effective cultural control. Any suspect roses should be removed and destroyed immediately or monitored for continued symptoms and removed as soon as presence of RRD is ascertained. In some areas burning is permitted and can be used to destroy diseased plants. If burning is not allowed in your area, plants should be bagged and removed. Diseased plants that have been uprooted should not be allowed to remain in the vicinity of healthy roses as they can continue to serve as a source of inoculum.

If possible, R. multiflora plants, which frequently serve as the source of inoculum, should be eliminated from the immediate vicinity (100-meter radius) of rose nurseries and gardens. Locations where individual multiflora rose plants have been removed should be monitored for regrowth and any regrowth should be removed and destroyed. Multiflora rose over larger areas is, however, difficult to control and complete removal may not be practical. To prevent infection of new transplants, avoid planting cultivated roses on hilltops or downwind of known multiflora rose plantings where the cultivated rose transplants are more susceptible to invasion by the mites. Space plants so that canes and leaves do not touch each other. Eriophyid mites do not have wings and must crawl from plant to plant unless carried by wind. Proper spacing makes it more difficult for the mites to move within a planting.

Use of miticides in the absence of cultural controls is not recommended. One way to use a miticide as an additional tool in a control program is to focus sprays on plants that surround spots where diseased plants have been removed.