Last summer we said we would not complain about rain anymore. Severe drought taught us a lesson we will never forget. That said, some are finding it difficult to appreciate frequent rain. When your backyard bird list starts to include gulls and you are having flashbacks from Woodstock that include the chant No more rain, no more rain it is tempting to complain. 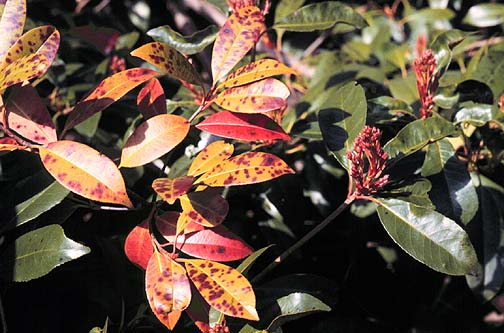 One big problem for gardeners with constant rain and cool weather is the disease triangle. We always have some trouble with diseases in the garden but constant moisture and cool weather makes it more so. The requirements for a disease to thrive include three basic factors, hence the triangle. The first is the presence of a disease pathogen. The second is a susceptible host. The third is the proper environment for the disease to flourish. With many diseases this proper environment includes cool wet weather.

One example is Photinia, a shrub belonging to the rosaceous family, and widely grown in nurseries and landscapes in the eastern United States. Several species, including Photinia serrulata and Photinia glabra, and a hybrid, Photinia x fraseri, are grown for landscaping. Because of its bright red, immature foliage, Photinia x fraseri, also known as "red tip," is the most popular photinia grown. All of these ornamentals are susceptible to leaf spotting caused by the fungus Entomosporium mespili. Other ornamentals reported to be hosts of the fungus include serviceberry (Amelanchier species), flowering quince (Chaenomeles species), loquat (Eriobotrya japonica), firethorn (Pyracantha coccinea var. formosana), Indian hawthorn (Rhaphiolepis indica), and mountain ash (Sorbus sitchensis).

Leaf spots on photinia first appear as minute, slightly raised dots on either surface of the leaf. Older spots have a slightly depressed center with raised margins. On the juvenile, reddish colored foliage of P. x fraseri, the tiny, new, circular leaf spots are a darker red than the surrounding healthy tissue. Older necrotic spots (up to 3-4 mm in diameter) have ashen gray centers and dark purple margins surrounded by an indefinite lighter purplish halo. The centers of the necrotic spots are dotted with minute black specks, which are the spore-producing structures, or acervuli, of the fungus. Leaf spots are discrete in light infections, but in heavy infections they often coalesce to form large, blighted areas. Infection is mostly limited to the leaf blade, but occasionally spots may occur on petioles and tender, young shoots. Heavy infections cause premature defoliation.

The fungus overwinters as mycelium in fallen infected leaves from the previous year. In the spring the fungus produces spores that are dispersed by splashing water to healthy tissue. Symptoms first appear on the new growth of the lowest branches and spread gradually upward. The fungus continues to sporulate throughout the growing season. Because the fungus preferentially infects tender, new growth, cultural practices that stimulate succulent growth, such as summer pruning or frequent pruning or fertilization, favor disease.

Controlling this disease and others can be accomplished by two methods, cultural and chemical. To culturally manage diseases consider the following.

Fungicides can control this disease preventatively, but they must be applied on a regular basis throughout the season for effective control. There are a variety of fungicides out there and we would recommend different ones for different diseases. It is best to find out what disease you are fighting rather than shooting first and asking questions later. If you are treating preventively it is a good idea to know which diseases your plant species is most likely to get.