If you are in the market for a pumpkin this week you should have no trouble finding one among the many farms, festivals, and market stands in the area. Selecting a pumpkin is often a personal thing but you may have a certain purpose in mind for your choice. The most popular use for pumpkins this week is probably for carving and/or decoration as jack-o-lanterns. If you go into your shopping experience knowing what your carving or painting design will look like you can pick an appropriate shape and size. When selecting a pumpkin you can pretend you are shopping for watermelons. Pumpkins are members of the gourd family that also includes watermelons, cucumbers, muskmelon, squashes, and gourds. Tapping on the side will tell you - that hollow sound may equal a rotten inside. 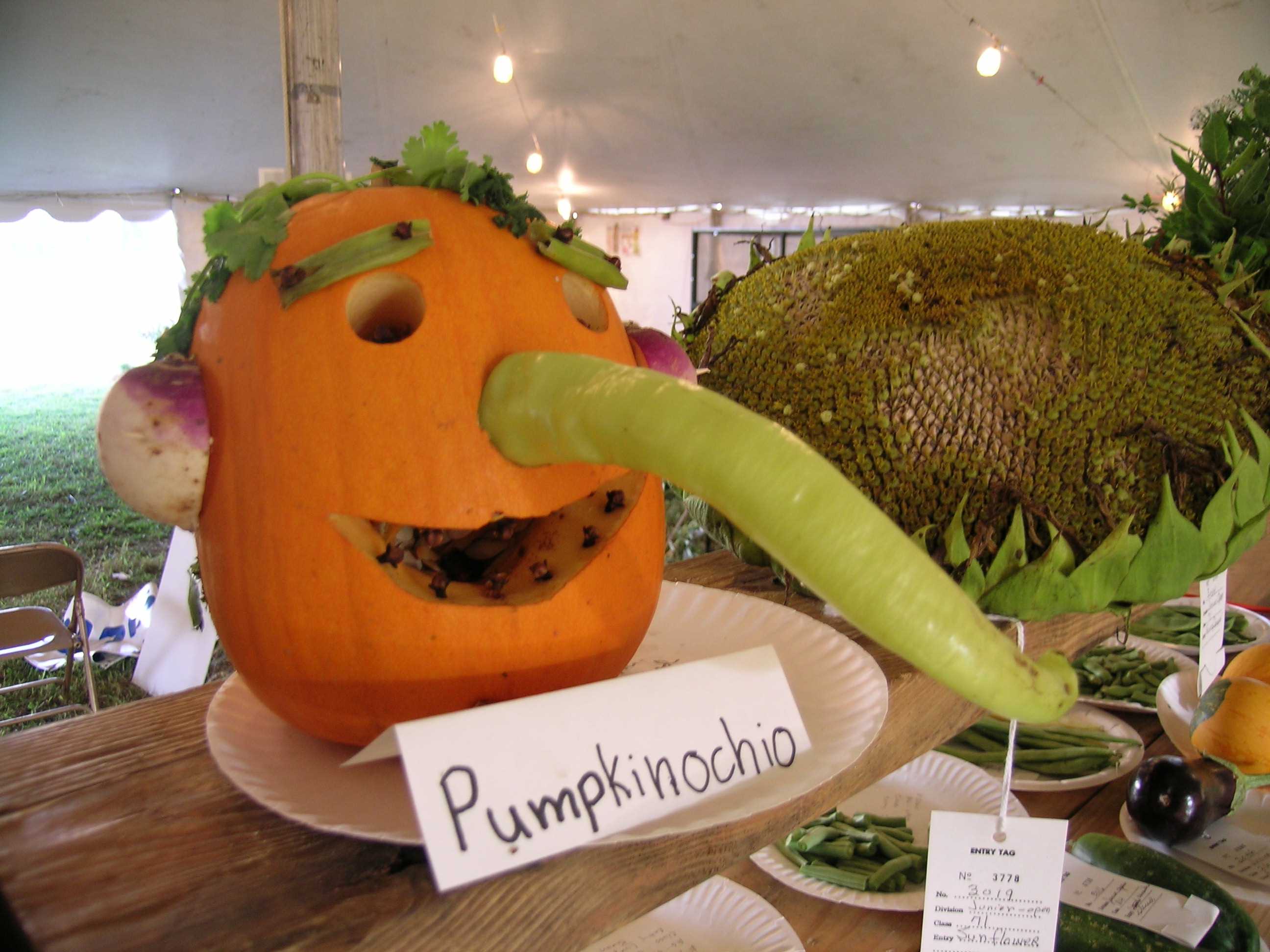 A jack-o-lantern from the county fair.

Depending on the state of your pumpkin when purchased and the way you treat it at home, a carved pumpkin can last anywhere from one day to one week in reasonable shape. You might prevent early shrinkage by coating it with an anti-desiccant or temporarily treat a shriveling pumpkin by soaking it overnight in water. Of course, painting your pumpkin rather than carving will avoid these problems.

If you were planning to eat your pumpkin instead of putting it up for display you are looking at this from a different angle. When selecting a pumpkin for cooking, the best selection is a "pie pumpkin" or "sweet pumpkin." These are smaller than the large jack-o-lantern pumpkins and the flesh is sweeter and less watery. However, you can substitute the jack-o-lantern variety with fairly good results. Pumpkins show chilling damage when the temperature drops below about 40 F and they will not tolerate frost or freezing whatsoever. So if you plan to eat that uncarved Halloween pumpkin on the first of November, you may have to protect it somehow from the cold nights.

To the ancient Scottish and Irish, Halloween or All Hallow's Eve involved rituals and games for foretelling the future, particularly marital prospects. Several of these rituals involved crop plants and have their origins in agrarian societies.

One ritual, described by Robert Burns, a famous Scottish poet, in his poem "Halloween," was that of pulling up stalks of colewort, a type of cabbage. Blindfolded and holding hands, the youth went into the garden each pulling the first colewort he or she came upon. The length of the stalk would foretell the height of the future spouse, and the amount of earth clinging to the roots indicated the couple's fortune. The stalks were then hung over the door one by one. The first names of those who happened to walk through the door were believed to indicate the names of the future spouses.

Another ritual practiced by young Scottish women was intended to indicate if their suitors were faithful. The woman placed two nuts on the fireplace grate naming one after her boyfriend and one after herself. If the nut representing the loved one jumped or cracked, it was thought that he would be unfaithful. If the nuts representing the woman and her suitor burned simultaneously, this foretold that they would be married.

The contemporary Halloween rite of trick-or-treating stems from this Irish custom: Irish farmers would go in groups from house to house collecting food for poor villagers. Those who gave cheerfully were promised prosperity, while less generous contributors were threatened by the group.

The jack-o-lantern is another contemporary custom claiming Irish origin. According to legend, an old drunkard named Jack made a deal with the devil and then tried to renege. The devil angrily threw a live coal at Jack, and it landed in a half-eaten turnip in Jack's hand. The result was the first jack-o-lantern. Early jack-o-lanterns were made from turnips. It was not until the Irish came to the United States that pumpkins were substituted for turnips.