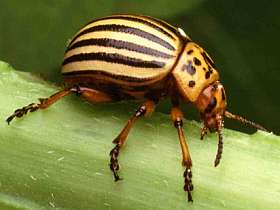 If you plant vegetables such as potatoes, tomatoes, and eggplant you may be familiar with our friend the Colorado potato beetle (Coleoptera: Chrysomelidae, Leptinotarsa decemlineata). We first see the adult beetles about this time of year as they awake from their winter rest and begin to search for food and a place to lay their eggs. The adults are about 3/8 inch long by 1/4 inch wide. The adult thorax, or midsection, is orange with black spots and the wing covers have five yellowish white and five black alternating stripes running lengthwise (see photo). Mature larvae are 1/2 inch long and reddish in color with two rows of black spots along each side. The eggs are yellow and individual eggs somewhat resemble small sausages standing on end.

The Colorado potato beetle (CPB) is found in most regions of the United States except for the Pacific Coast. It feeds exclusively on the foliage of cultivated and wild plants in the nightshade family (Solanaceae). It is a major pest of potatoes, eggplant, and tomatoes and subsists on various weeds such as horse nettle and buffalo burr.

The CPB overwinters in the soil as an adult. In central Virginia, overwintering adults emerge in May from nearby woods, hedgerows, or fields in which the crop from last year was grown. When temperatures are cool, the emerging beetles seek suitable host plants (potato in the early spring in Virginia) by walking, but are capable of flying long distances when temperatures warm up.

A female beetle may lay several hundred eggs in her lifetime. Oviposition usually begins in early May, and the eggs are laid in tight clusters of 30 to 60, usually on the underside of host leaves. The eggs hatch within four to nine days. Larvae are usually found feeding in groups on the undersides of the leaves as they pass through four instars or molts.

Larvae complete their growth in two to three weeks, and peak larval populations develop by late May when the mature larvae pupate underground in earthen cells. The pupal stage lasts from five to ten days before the summer, or first-generation, adults emerge in June.

The rate of development for each stage depends on the temperature. In central Virginia, potatoes are harvested in late June or July; and therefore, most of these first-generation adults will feed on the remaining potato foliage and then enter the soil to overwinter. Some of these adults, however, will produce a partial second generation on tomato, eggplant, fall potato, or other available, suitable foliage. There is much overlap within a generation, and typically eggs, larvae, and adults can be found on host foliage at any given time within the season, although generally one stage predominates at a given time.

Adults and larvae feed on foliage in the same manner. If CPB adults are present early in the season, they will clip small tomato or eggplant transplants or the emerging potato shoots at the ground level. As the larvae grow, they disperse through the plant canopy and consume large portions of the foliage. Large (third and fourth instar) larvae and first generation adults are the stages that do the most damage. If population pressure is heavy, the larvae and adults will completely defoliate the host plant and then feed on the stems. Loss of foliage weakens the plant and consequently results in reduction of marketable yield (tubers, fruit).

The spined soldier bug, Podisus maculiventris, and the two-spotted stinkbug, Perillus bioculatus, prey upon CPB eggs and larvae. Some beetles, specifically the ladybird beetle, Coleomegilla maculata, and ground beetles in the genus Lebia also prey on the eggs, and there are tachinid fly parasites in some regions. Soil borne fungal pathogens such as Beauveria bassiana may cause high mortality of pupae and overwintering adults. None of these organisms, however, is capable of making an economic impact on large populations.

Organic insecticides containing Bacillus thuringiensis San Diego, neem (azadirachtin), or cryolite are effective if applications are timed to coincide with peak egg hatch and small-larvae activity. The formulation spinosad (Entrust) is effective against both larvae and adults.

Because the CPB feeds exclusively on solanaceous crops and disperses by walking when temperatures are cool, rotation to a nonsolanaceous crop is one of the most effective cultural control measures one can take. Plastic-lined trenches along the side of a potato field where overwintering adults will enter are effective early in the season. Trenches should be at least 12 inches deep, with the sides having a slope of at least 46 degrees. A feasible option for small potato fields is spreading a thick layer of straw mulch after planting to create a favorable environment for the potatoes and an effective barrier to adult beetles. Mechanical control methods such as flaming also have been developed.

The high reproductive capacity of the CPB and its feeding exclusively on a few closely related plants makes resistance to insecticides a problem. Rotating to nonsolanaceous crops and avoiding repeated applications of insecticides in the same chemical class with the same mode of action is recommended for this reason. Consult your local Extension office for current insecticide recommendations because the recommendations change over time. Currently recommended materials include the neonicotinoids imidacloprid and thiamethoxam, of which there are various formulations that may be applied in the soil at planting, as potato-seed-piece treatments, or as foliar sprays. These materials may be applied as drenches to flats of tomato and eggplant transplants, and this technique provides effective protection for small transplants. Other effective materials include foliar sprays of spinosad, abamectin, and the materials listed under organic control. Older materials such as the organophosphates phosmet, phorate, and methamidophos; the organochlorine endosulfan; and numerous pyrethroids (esfenvalerate, permethrin, bifenthrin, cyfluthrin, lambda-cyhalothrin, etc.) may still provide effective control in regions where resistance is not a major problem.