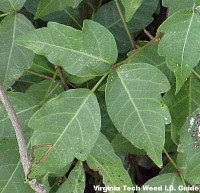 Poison ivy is one of our favorite plants to hate. Anyone who has ever experienced the blisters, swelling, and extreme itching from poison ivy understands and keeps a respectable distance from this plant whenever possible. Poison ivy (Toxicodendron radicans), poison oak (Toxicodendron pubescens), and poison sumac (Toxicodendron vernix) all grow in Virginia, but poison ivy is by far the most common. It grows in non-cultivated sites such as stream banks, roadways, fencerows, woodlands, & shrub and perennial beds. Because it is so common it is a good idea to know how to identify and control it.

The best way to identify poison ivy is by its characteristic compound leaf consisting of three leaflets. The leaflets are two to four inches long, dull or glossy green with pointed tips. The middle leaflet is generally larger than the two laterals. The margins of the leaflets are variable, appearing irregularly toothed, lobed, or smooth. The leaves are positioned alternately on the stems. In contrast, Virginia creeper, a non-poisonous vine often mistaken for poison ivy, has five leaflets radiating from one point of attachment.

Poison ivy can be found in one of three forms, as an erect woody shrub, a trailing shrub running along the ground, or a woody vine. The vine is usually seen growing on trees or other objects for support. It has aerial roots along the stem that give it the appearance of a fuzzy rope. Yellowish-green flowers occur in compact clusters in leaf axils, and are produced in June or July. The berry-like fruit is grayish, with distinct lines marking the outer surface, and is about an eighth of an inch in diameter.

So how do you control it? There are three methods that can be effective in eradicating poison ivy. They include hand pulling, severing the vine and then treating the regrowth with an herbicide, or applying an herbicide to individual leaflets.

Hand pulling is most successful when the soil is moist. The roots can be dug and pulled out in long pieces. Care should be taken to remove the entire root because the plant can resprout from sections of root left in the ground. Avoid skin contact by wearing gloves while you work and washing clothing and gloves immediately after. The washing machine should be rinsed thoroughly afterward to eliminate the possibility of contaminating other clothing.

Vines growing on trees can be difficult to pull out of the ground because their roots may be entangled with tree roots. Sever the vine at the base and carefully pull it out of the tree or simply treat the wound. Glyphosate, a non-selective, translocated herbicide sold under several brand names, can be applied to the new shoots that will soon emerge from the base of the old plant. Other broadleaf herbicides such as dicamba and triclopyr may also be used. Glyphosate is most effective if applied to actively growing foliage two weeks on either side of full bloom, in early summer. Since it is non-selective and kills all green plants, use a shielded spray or paint it on so as not to contact leaves or green bark of desired plants.

Poison ivy is difficult to control even with herbicides. Glyphosate will not provide complete control from a single application, and repeat applications to treat regrowth may be necessary. Read the label to make sure that poison ivy is listed on the label and then follow the directions for application method and for your own safety.

The blistering rash caused by poison ivy is the direct result of contact with the oily toxicant, known as urushiol, found in resin ducts within the phloem. These ducts are found throughout the plant, including the roots, stems, bark, leaflets and certain flower parts. The plant has to be crushed, broken, or in some way injured to release the resin. The injury may be something as little as an insect chewing on the plant.

Once urushiol is released, it can find its way to your skin by direct contact with the plant and then spread by touching other parts of the body. Because the sticky, oily substance is easily transmitted, there are indirect ways to contact it such as from the fur of a pet or contact with garden tools or gloves, clothing, golf balls or other objects that have come in contact with an injured plant. Contrary to popular belief, the rash from poison ivy cannot be transmitted from touching the oozing blisters.

If you know you have contacted poison ivy, wash the area as soon as possible with soap and cool water. Warm water may cause the resin to penetrate the skin faster. Because urushiol can penetrate in a matter of minutes, you may still get a rash, but at least you have contained the infected area. A visible reaction, redness, and swelling may be apparent within 12 to 24 hours. Contact your family physician or pharmacist for recommendations for an effective non-prescription medication.

One additional caution is that people can contract a rash by exposure to smoke of burning poison ivy. Be careful not to burn wood with the poison ivy vine attached to it. Take extreme caution to avoid inhaling smoke or contact of smoke with skin and clothing.