As summer draws to a close some of our flying friends are getting ready to head south. Most of these are birds of course but I am sure many people also think of the monarch butterfly in this way. On one of the first days that felt like fall this week I found myself wandering through what might be called weedy meadows in search of milkweed food for monarch caterpillars. Near their food plants there were a few adults flying about but on the milkweed many caterpillars were seen as well as the occasional chrysalis. I and my coworkers have been tending to the needs of a couple dozen caterpillars that will be used in an educational program later this month about these interesting butterflies.

The monarch butterfly, Danaus plexippus, ranges from North and South America and the Caribbean to Australia, New Zealand, the oceanic islands of the Pacific, Mauritius, the Canary Islands of the Atlantic, and Western Europe.  The are found mostly in open areas feeding on milkweeds (Asclepias). There are over 100 different species of milkweeds found throughout their range.  The common species found along our roadsides and in meadows, Asclepias syriaca, is sometimes thought of as a weed but many people purchase or share other species of milkweed for food plants for butterflies and for their brightly colored flowers. 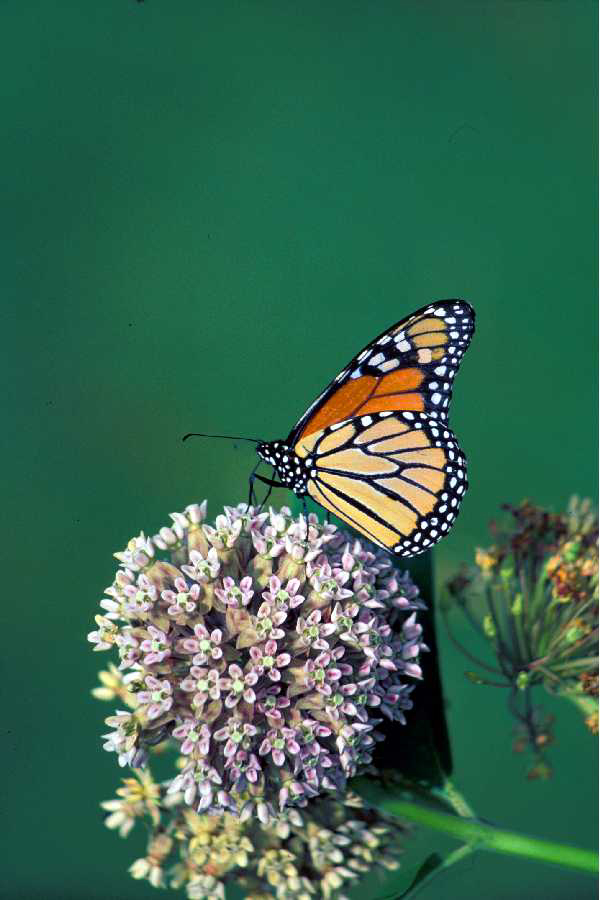 Monarch on a common milkweed.

Monarch adults range anywhere from a little over three inches to almost five inches in wingspan. Both male and female monarchs are bright orange with black borders and black veins. The veins on the female are thicker than those of the male. Male monarchs also have a swollen pouch that resembles a black spot on both of their hind wings. Their orange color is a well advertised warning that monarchs are poisonous to vertebrates due to their diet of milkweed containing cardiac glycosides. In most insects this acts as a feeding deterent to protect the plant but monarchs have evolved a way to parlay this into protection for them.

The caterpillars we are tending hatched from eggs laid on the milkweed plants by female monarchs. They ate and grew and molted several times as they got bigger and became too big for their own skin. Eventually each caterpillar stops growing and molts a final time to form a chrysalis around itself where it will metamorphose into the adult butterfly. When the adults emerge they will almost be ready for their big trip south.

Like birds, Danaus plexippus follows a pattern of seasonal migration. There are two distinct populations in the North America, those that breed in the East and those that breed in the West. Each autumn millions of these butterflies leave their breeding grounds and fly to overwintering sites. The Eastern population overwinters in the volcanic mountains of eastern Michoacan in central Mexico. The Western breeders spend their winters along the California coast. Similar migratory behavior has been observed in Costa Rican and Australian populations.

If you would like to know more about these butterflies and participate in the release of the ones we have raised please plan to attend the presentation at the Ivy Creek Natural Area on September 30 at 2:00pm where Michelle Prysby, State Coordinator of the Virginia Master Naturalist Program, will teach about the natural history and ecology of this insect. Following the presentation you can assist in the tagging and release of these butterflies in the field.