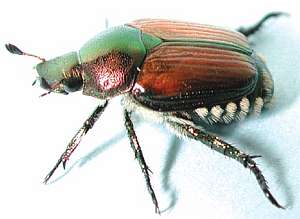 Japanese beetles have been developing underground during the spring and are emerging now. The good soaking rains we had recently will help to release them from the soil. About a half-inch long, Japanese beetles are shiny, metallic green with coppery brown wing covers that extend almost to the tip of their back end. The immature grubs are white, slightly curled, and have brown heads. The grubs are about one inch long when mature.

First reported in North America in 1916, the Japanese beetle now occurs in most of the eastern United States. The beetles feed on over 300 different kinds of shade and fruit trees, shrubs, flowers, small fruits, garden crops, and weeds. Some of their favorites are roses, crape myrtle, grapes, and fruit trees. Japanese beetle adults eat flowers and foliage, leaving only a lacy network of leaf veins.

The beetle grubs are serious pests of the roots of grasses and shrubs. Japanese beetle grubs occur in lawns, golf courses and pastures where they burrow through the soil consuming roots. Areas of dead grass may appear when large numbers of grubs are present especially during dry spells in September or early October. The grubs overwinter in cells in the soil about 6 inches deep. In spring, they move almost to ground level, where they complete feeding and then pupate.

Adults emerge as early as mid May. Peak emergence occurs in July. Throughout summer, the beetles attack the fruit and foliage of many plants. Soon after emerging, female beetles deposit 40 to 60 eggs in small batches 2 to 3 inches deep especially in damp soil. During dry periods, adults may be more attracted to low lying and irrigated areas to lay eggs. In extremely dry weather, many eggs and larvae do not survive. In warm, wet summers, eggs hatch in about 2 weeks. The newly emerged larvae feed until cold weather forces them into hibernation. One generation occurs each year.

Controlling these beetles is virtually impossible. As the sports clich goes, you cannot stop them, you can only hope to contain them. Managing these insects can be approached in two phases. The first is to attack the grubs after they hatch from their eggs in August. This method is primarily used to treat lawn problems as it does little to combat the strong flying adults in July as they search for food. The second phase is to attack the adult beetles where they are found. This can be effective if you are willing to monitor your plants on a daily basis.

For lawn problems, there are several methods to try. The first two choices are applications of a pathogenic fungus called Beauvaria bassiana or entomopathogenic nematodes. These treatments are specific to insects and will not harm other creatures in or around the soil being treated. Commercial preparations of Beauvaria bassiana are sold as Naturalis T and should not be used in conjunction with a fungicide. Likewise entomopathogenic nematodes are sold commercially to control white grubs and can become established in the soil for some time. Nematodes are species specific so it is important to buy products with Steinernema riobravae or Heterorhabditis bacteriophora species as active ingredients for Japanese beetles. These active ingredients are listed on the label along with application procedures. It is also important to apply these only after the soil temperature has reached 60 degrees F.

Chemical treatments are also available but remain as a last resort because of their harmful effects to beneficial insects and earthworms in the soil. These chemicals include halofenozide (Grubex) and imidacloprid (Merit). Soil insecticides are most effective in August to control young grubs feeding near the soil surface. Reducing turf thatch buildup increases the effectiveness of chemicals and reduces shelter for insects as well. Whenever chemical products are used it is important to keep children and pets off the treated area until the spray is dry or until granules are watered into the soil and the area is dry.

Our ornamental trees and shrubs suffer most from the feeding of adult Japanese beetles. Because they are such good fliers and because there are so many of them, the adult beetles are difficult to control. Treatments for adults are either traps or contact poisons.

The cheapest and most enjoyable method is to fill a small bucket with soapy water and simply pick the beetles from the plants and drop them in the bucket. If you have children nearby you might offer them a penny per beetle. It can be fun if you look at it right and it is surely educational to observe the little known world of insects.

Japanese beetle traps catch up to 75% of the beetles that approach them when used correctly. Traps may lower beetle populations from 30% to 40% if placed throughout an area. The trapped beetles must be emptied from the traps every day or two to prevent them from rotting and releasing ammonia, which is a repellant to other Japanese beetles. These traps are commercially available and the traps are very effective in attracting Japanese beetles. Consequently, traps should be placed as far away from the plants to be protected as possible. Traps, alone, are not likely to give satisfactory protection.

Chemical treatments for adult beetles are applied as the beetles begin to congregate on host plants in late June and early July. These treatments may be repeated as needed into August. Since adults actively fly and move continuously, they seem to be present constantly even where treatments have been applied. Chemicals currently recommended for these treatments include acephate, carbaryl, cyfluthrin, esfenvalerate, imidacloprid, malathion, pyrethrins, and tetramethrin. Always check the pesticide label for instructions regarding application and safety procedures.

Most of us have personal goals for our plants and what we are willing to tolerate when it comes to feeding damage. Since most plants can suffer some feeding damage from Japanese beetles and survive you must weight the pros and cons of treating with pesticides versus your comfort zone and the health of your plants.