The emerald ash borer, a new invasive insect was found early this month in Fairfax County in the Herndon and Springfield areas. It is not the first time this creature has crossed into Virginia but this time it might be here to stay. The threat of these insects has existed ever since they became established in the Midwest in 2002. Despite careful monitoring efforts and warnings from local experts, these beetles are back. When in comes to invasive insects, always bet on the bug. 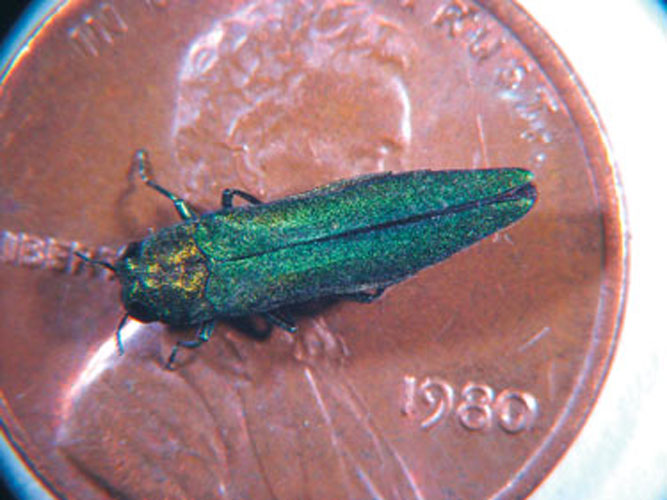 A photo of the emerald ash borer.

You can do our trees and forests a favor by trying to slow down this and other pests. Do not move firewood to use at your cabin, campsite or home. Instead, buy firewood locally from a seller close to your destination. Why not bring firewood with you? According to the Virginia Department of Agriculture and Consumer Services Office of Plant and Pest Services, native trees and forests in the U. S. are threatened by invasive insects and diseases that live in dead and dying wood. These devastating pests may be accidentally spread to new locations by campers, hunters, other outdoor enthusiasts and homeowners moving firewood from one location to another.

The emerald ash borer, (EAB), Agrilus planipennis Fairmaire, an invasive insect from Asia, is one example of a pest spread by moving firewood. The tiny emerald ash borer, named for its metallic green color, attacks ash trees with disastrous results. In its adult form, EAB consumes ash tree foliage and actually causes little damage. The real devastation comes from the larvae, which feed on the inner bark and disrupt the ability of an ash tree to transport water and nutrients.

The emerald ash borer was discovered in 2002 in southeastern Michigan and Windsor, Ontario. It infests and kills North American ash species (Fraxinus sp.) including green, white, black and blue ash. Damage is caused by the larvae, which feed in tunnels (called galleries) in the phloem just below the bark. The serpentine galleries disrupt water and nutrient transport, causing branches, and eventually the entire tree, to die. Adult beetles leave distinctive D-shaped exit holes in the outer bark of branches and the trunk. Adults are roughly 3/8 to 5/8 inch long with metallic green wing covers and a coppery red or purple abdomen. They may be present from late May through early September but are most common in June and July. There are other beetles that resemble the EAB but it is always good to ask someone to identify suspicious beetles when found.

EAB is responsible for over 20 million dead and dying ash trees in Michigan, Ohio, Indiana, and Illinois since its accidental introduction into the U. S. in 2002. The destruction has cost homeowners, landowners, the nursery and forest products industries, and government millions of dollars. Because there are no native predators of the emerald ash borer in North America, it is very difficult to control the spread once infestation takes place. Therefore, it is vital to block any opportunities for introducing the pest into new territory.

In 2003, Virginia had an alarming encounter with the emerald ash borer. When state officials determined that ash trees sent from a Michigan nursery and planted at an elementary school in Fairfax County, Virginia, were infested with EAB, it took the combined efforts of federal, state and county agencies to implement an eradication program. To prevent the spread of the insect, all ash trees within a half mile radius of the school were destroyed. Surveys taken by Virginia investigators for three consecutive seasons after the incident showed no new evidence of EAB in the state but now they are back.

For additional information about the emerald ash borer and actions taken to combat its spread, check out the following sites: