As we enter the dog days of summer you have probably heard one of our insect friends, the annual or dog day cicada, singing in the trees. The dog days get their name from the constellation Canis Major and its brightest star, the Dog Star, Sirius. Sirius rises before the sun during this time period (roughly early July through mid-August) and is more visible than in the spring. As the hottest and most humid days of summer generally coincide with the period where Sirius rises and sets with the sun, ancient Romans believed that heat from Sirius was increasing the heat of the sun. But I digress.

The dog day cicada is something we see or hear every year, unlike the periodical cicada which appears every 13 or 17 years. Dog day cicadas appear in summer and have life cycles of 2 to 5 years but their broods overlap so we always see some emerging each year. 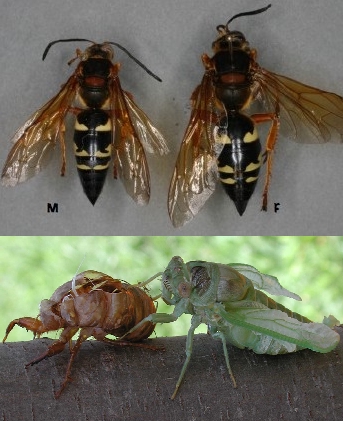 Adults vary in size and color according to species. All have prominent bulging eyes and semi-transparent wings held roof-like over their large bodies. The larger species are about 1-5/8 inch long and 1/2-inch wide with brown or green, black and white body markings. Nymphs resemble wingless adults, are brown and have strong front legs well developed for tunneling in the soil.

Female cicadas insert clusters of eggs into the twigs and small branches using a saw-like egg laying device called an ovipositor. In 6 to 7 weeks, small nymphs hatch from the eggs and drop to the ground. They burrow into the soil, seeking tree roots. As they molt through several growth stages or instars, they may burrow several feet down. Fully developed nymphs burrow out of the ground at night, leaving a 1/2-inch hole behind them.

The nymphs climb onto tree trunks, picnic tables, or other objects. Adult cicadas emerge from this last nymphal stage through a crack along the back, leaving the light brown cast skin behind. Adults can live for 5 to 6 weeks. I am sure many east coast residents have some memory of collecting their cast skins as children.

Male cicadas sit on trees and "sing" to attract females by means of two special vibrating membranes in the sides of the abdomen. Females do not sing. Adult cicadas do not feed on leaves but may suck juices from tender twigs. Nymphs feed on the sap from tree roots.

Along with the dog day cicadas we also start seeing their predator, the cicada killer wasp, Sphecius speciosus. This is a solitary wasp, notable for its robust black and yellow body, up to 1 ½ inches long. Females nest in dense aggregations in the soil so if you have one you probably have many. They are commonly seen in late summer skimming around lawns, shrubs and trees searching for cicadas.

After digging their nests, female cicada killers capture cicadas and paralyze by stinging. They paralyzed cicadas are then brought back to the burrow as food for their young. We sometimes see the cicada killer wasp struggling on this journey as the cicadas are about twice the size of the wasps. After placing them in a nest cell the wasp lays one or two eggs on the cicada and seals the cell with soil. The egg hatches in a couple days and the larvae complete their development in about two weeks. The mature larvae overwinter in an earthen cocoon and pupation occurs in the spring.

Female cicada killer wasps are not aggressive and rarely sting unless they are picked up, stepped on, or otherwise provoked. Males will aggressively defend their territory but they have no sting. Although they appear to attack anything nearby, they are actually investigating anything as a potential mate and will rarely land on people. To put a positive spin on these wasps, you might consider the benefits they give our trees that are otherwise being fed on by cicadas.