Last week I wrote about the basics of diagnosing plant diseases, separating the biotic problems from the abiotic problems, and I presented a problem for your consideration. Pictured were four diseased plants and one of those plants was not like the others. One of those plants was not the same. The trick was (other than imagining yellow in the grayscale of the newspaper) to see how one plant did not show uniform distribution of its yellowing. I know this is not easy because I am challenged by it on a regular basis. Like most things you do well it takes practice.

Anyway, so you will not be kept in suspense the answer was number 4. Why? The four photos showed varying types of plant disease but only one showed a random distribution of symptoms that is more likely to be caused by a living (biotic) organism. Number 4 was a picture of rose mosaic disease. The splotches of yellow are irregularly shaped, not on every leaf or leaflet, and not even on the same place on the leaves it affected. The others were 1) herbicide damage of cranberry (accidental spray drift), 2) iron chlorosis of pin oak (caused by high soil pH too much lime), and 3) salt damage of tomato (too much fertilizer). Each of these showed some sort of uniformity.

If a biotic disease IS involved in a plant problem, the next question is, "What pathogen(s) is causing the problem?" There are at least ten thousand fungi, and hundreds of bacteria, viruses and nematodes that could cause plant disease. To narrow this down requires some basic knowledge of morphology and biology of the individual groups of plant pathogens. At this stage, plant pathologists usually look for two things: disease symptoms and disease signs. 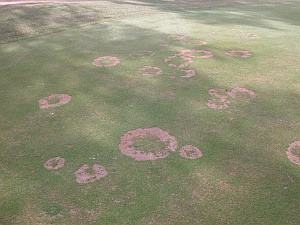 Fairy rings commonly produce a ring, or a halo of diseased turf with healthy turf to the inside and outside.

Disease symptoms are the changes in the plant from its normal appearance in response to the pathogen. Individual (groups of) pathogens may cause specific symptoms. For example, mosaic symptoms are usually associated with viral diseases. Spots and lesions are usually associated with fungal and bacterial diseases. Viruses rarely cause root rots or cankers (stem lesions). Thus, learning symptoms that tend to be associated with the different groups of pathogens is an important step toward correct diagnosis of plant disease problems.

Detecting disease signs may also be helpful at this stage. Disease signs are vegetative and/or reproductive structures of plant pathogens left on the plants or plant parts. Some fungi and bacteria grow on the surface of leaves, stems, petals, etc., where they may be seen. The most obvious examples are rusts and powdery mildews, which can often be identified with the naked eye from the massive amounts of spores or white fungal threads on the plant surface.

Sometimes signs of fungal pathogens may be observed on diseased plant parts after placing them in a humid chamber for a day or two. A plastic bag with a moist paper towel works well for this. Some bacteria may be released from infected plant tissue where they may ooze visibly from wounds under wet conditions. Pathologists sometimes use this trait to test for bacterial disease in the lab by cutting a small piece of infected tissue and placing it in a beaker with tap-water. Bacteria in the plant tissue may ooze into the water, making it cloudy.

A similar procedure may be used to examine certain nematode diseases. Nematodes are large enough to be seen with a hand lens after they are released into water. Thus, disease symptoms and signs along with some preliminary observations can help narrow down the causal agent of many disease samples to specific pathogen groups.

Substantial additional examinations are needed to determine exactly what species causes a disease problem. Justification for this extra effort depends on disease management options. Further identification is justified only for fungal diseases in situations in which a fungicide(s) must be applied to keep the disease under control. There are several fungicides labeled for control of fungal diseases, but some are only effective in controlling a specific group of fungi.

There are two types of fungi: true fungi, and oomycetes (water molds), that cause plant diseases. These different groups of fungal pathogens have different physiologies, so fungicides that can effectively control diseases caused by true fungi may have no impact on those caused by oomycetes. Major oomycete pathogens include Phytophthora and Pythium species, which are primarily responsible for root rot of numerous plants. Also included are the species that cause downy mildews of many crops.

Consulting a professional diagnostician or sending a sample to a diagnostic lab is recommended when you are uncertain about which group of fungal pathogen is responsible for the plant problem. Detailed examinations may be useful for helping with cultural recommendations or for fungicide recommendations if the services of a licensed pesticide applicator are utilized. However, there are few options for control of bacterial, nematode and viral diseases in the landscape. Thus, diagnosing which group of pathogen is causing the problem is most likely all you need.