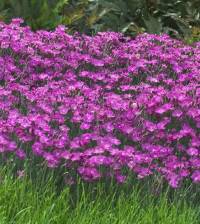 It is the season for plant shopping and you may have difficulty as I do in deciding what to buy. Of course if you have done your homework you already know what your landscape needs and your choices are narrower. But it is still hard to resist the impulse to buy what is blooming as we wander through the garden centers, farmers markets, and plant sales.

One plant that catches my eye every year is Dianthus gratianopolitanus Feuerhexe (also known as Firewitch). Cheddar pink is the common name of this excellent sun exposure perennial. It is an evergreen selection with bluish-gray, silvery foliage and purplish-pink fragrant flowers in mid-spring. Rebloom can occur in the summer and into the fall. This cheddar pink is hardy from zones 3 to 9. Mature mats of this cheddar pink have foliage 3 to 4 inches tall and 6 to 12 inches wide. Flowers will reach 6 to 8 inches high. This evergreen perennial performs best in full sun in well-drained soils.

The genus Dianthus is a member of the Caryophyllaceae family with species found native to the Mediterranean, Balkan Peninsula, and Asia Minor regions. The genus contains annual, biennial, and perennial species and includes plants with the common names of carnations, sweet Williams, and pinks. The name Dianthus originates from the Greek dios and anthos, the divine flower, which refers to the flower of a god, an indication of the esteem in which the flower has always be held. The common name associated with Dianthus gratianopolitanus is cheddar pink. The origin of the term pink or pinks is likely from the Dutch Pinkster or the German Pfingsten for Pentecost, the time during which the plants bloom. Cheddar pinks are named for Cheddar Gorge in southwest England, one of the locations where it grows wild. The Kayser & Seibert Nursery of Germany introduced Dianthus gratianopolitanus Feuerhexe in 1957. It was largely unknown in North America until a Connecticut nurseryman discovered it in 1987. Pierre Bennerup of Sunny Border Nurseries Inc. found two small plants of Feuerhexe in the Van Delft garden center in Noordwijkerhout, The Netherlands while traveling with a small group of perennial growers from the United States. He was impressed with the plants because they were in full bloom, well beyond the normal flowering season. Pierre purchased these two plants and started producing new plants from top cuttings. Plants were shared with other growers and the rest is history as thousands of Feuerhexe have been sold since this Dianthus was introduced into North America.

The landscape possibilities for this cheddar pink are vast. It is excellent as a border edger, as a rock garden plant, planted in wall crevices, or as a ground cover on a sunny slope. It is at home in the herb garden, a formal border or a cottage garden. Plant combinations that work with this Dianthus include Siberian iris (Iris sibirica) in the spring, later on with threadleaf coreopsis (Coreopsis verticillata Moonbeam or Zagreb) and in the fall match Firewitch with plumbago (Ceratostigma plumbaginoides). The striking gentian blue flowers of plumbago compliment the color of the Dianthus foliage. And the bronze fall color of plumbago and the silvery foliage of Dianthus are sensational. A cottage garden look can be created with a combination of Feuerhexe and catmint either Nepeta xfaassenii Walkers Low or Blue Wonder. The fragrant garden or the well-traveled walkway is another choice for this perennial with the clove-spiced fragrance.

Dianthus gratianopolitanus Feuerhexe (Firewitch) is easily grown if a few cultural tips are followed. Dianthus selections should be sited in full sun locations or in light shade in extremely hot climates. The soil should be well-drained and neutral to slightly alkaline. Plants placed in poorly drained soils will eventually deteriorate. In moderate to high rainfall areas, one should mulch with pea stone or gravel to keep foliage clean and dry. Do not mulch with deep layers of organic matter, especially in winter. After flowering in late spring, the spent flowers should be cut back which will promote rebloom later in the season. Eliminating plant stress created by improper cultural techniques can prevent potential disease problems, such as rust, leaf spot, root rot, and Fusarium wilt. Information on Dianthus was provided by the Perennial Plant Association (www.perennialplant.org).

In addition to the many fine garden centers in our area there are always plant sales this time of year that are worth a look. On Saturday May 6 the Piedmont Master Gardeners will be selling at the Meadowbrook Shopping Center in Charlottesville from 9am to noon. After you visit there you can stop by the Charlottesville City Market and/or the Crozet Farmers Market. On Sunday May 7 the Nelson Master Gardeners, among others, will be selling at the Rockfish Valley Ruritan Park from 9am to 3pm.