Many ornamentals and other plants, including fruit trees and brambles, are affected by crown gall, a disease vectored by the bacterium Agrobacterium tumefaciens. The disease is especially common on rose and euonymus in the landscape; however, many other woody species, including cypress, hibiscus, lilac, flowering peach, privet, viburnum, and willow, are susceptible.

Agrobacterium tumefaciens is soil-borne and enters the plant through wounds in the bark. This bacterium is unusual in that it transfers part of its genetic material to its host upon infection. After the bacterium attaches to wounded plant tissue and multiplies briefly among plant cells, the bacterium's tumor-inducing genetic material (TDNA) moves into the host plant cells and is maintained with the host's genetic material. The plant cell expresses the bacterial TDNA as if it were its own. As a result, galls are formed. Since the bacterium itself is not necessary for tumor development, it usually disappears from the galls after growth of the gall begins. 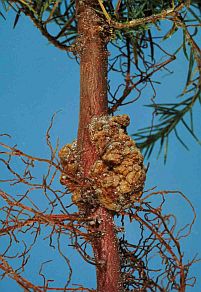 Infection by Agrobacterium tumefaciens induces the host plant to produce hormones that cause abnormally rapid cell division and enlargement of stem or root tissue (see photo). The position of the gall is determined by the location of wounds. Galls range in size from a fraction of an inch to several inches in diameter. Plant tissue found inside the galls is disorganized. Galls are frequently invaded by secondary bacteria and fungi.

Galls that develop on diseased plants may interfere with water and nutrient transport and result in unthrifty plants or death; however, in many cases the damage is mainly cosmetic. Usually galls are located on the stems or trunk at the crown (soil line). However, galls on some plants, such as willows, may be below the soil line on the roots and may be apparent only after trees are dug. Occasionally, galls are found on branches, as is often the case on wintercreeper euonymus (Euonymus fortunei) where stems are in contact with the soil.

The presence of visible galls on ornamentals in nurseries is considered sufficient for plant destruction. Galls do not appear until after the plant has been growing for one or more seasons; thus, losses due to crown gall can be costly to the producer. Because Agrobacterium tumefaciens is soil-borne, crown gall is associated with and spread by infested soil as well as infected plants. In nurseries and greenhouses, this combination of soil and plant infestation complicates disease control. Strict sanitation is necessary to prevent spread of pathogenic bacteria during vegetative propagation by cuttings or grafting. It is imperative that stock plants grown for cuttings be free of crown gall. Tools used for grafting or budding should be dipped in a solution of 20% commercial bleach or a 1/2% solution of potassium permanganate to prevent spread.

Soil around plants with crown gall can be assumed to be infested with Agrobacterium tumefaciens. Nursery soil in which crown gall has occurred should be treated with a soil sterilant before replanting to a susceptible crop. In the landscape, planting susceptible species in soil known to be infested with A. tumefaciens should be avoided. Growing a nonsusceptible crop, such as grass, for three years can essentially eliminate the bacteria from the soil. Although the crown gall bacterium has a wide host range, many plants are immune to the disease and can be planted in sites with a history of crown gall. A list of species resistant or immune to the disease is provided in Table 1.

A biological control agent consisting of certain strains of the related bacterium Agrobacterium radiobacter has been shown to be very effective in reducing the incidence of crown gall on susceptible plants. Agrobacterium radiobacter competes with A. tumefaciens both as a soil saprophyte and for attachment to wound sites. Some strains also produce a toxin that is active against strains of A. tumefaciens. This biocontrol agent is available commercially as Galltrol A, Norbac 84C, Nogall, or Diegall for control of crown gall on many ornamentals, such as euonymus, rose, clematis, and weeping cherry. It can also be used on nonbearing almonds, apricots, cherries, nectarines, peaches, plums, prunes, raspberries, and walnuts. Plants should be dipped in the product before transplanting. Sanitation and prevention of wounding must be used to prevent infections of aboveground plant tissue.