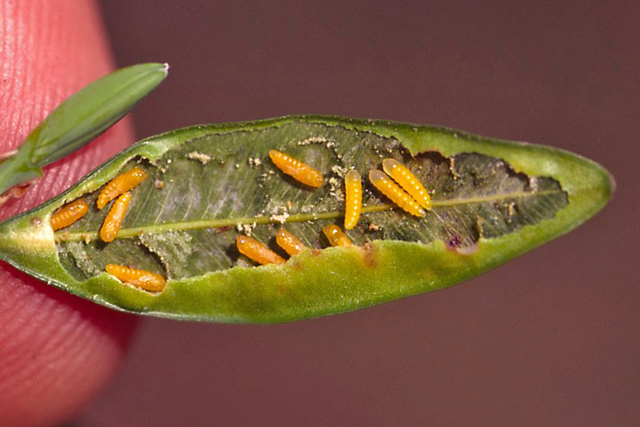 A boxwood leaf with leafminer maggots.

Most varieties of common or American boxwood are highly susceptible to the boxwood leafminer. English boxwood is less frequently infested. Damage is caused by larvae feeding on the tissue between the outer surfaces of the leaf, leaving a visible trail or tunnel, thus, the term "leafminer." Infested leaves appear blistered from late summer through the following spring. New leaves do not show signs of mining until late summer when larvae are larger. A dozen or more larvae may occur in a single leaf. By fall, or in early spring, premature leaf-drop may result from severe infestation.

Larvae first occur in the leaves in early June. They hatch during late April and early May from eggs laid by adults 3 to 4 weeks earlier. The only evidence of infestation is egg-laying punctures on the undersides of the leaves which appear as tiny blister spots. There is one generation in a single season. Adults are active before and after the first of May. Eggs are present from then until early June. Larvae feed in the leaves from June until fall and spend the winter in the leaves. They pupate in April.

The best control for boxwood leafminer is a systemic that targets the larvae in the leaf. However, any systemic products put down now will likely not affect the current generation of larvae. If you have a heavy population of boxwood leafminer you want to get your systemic down anytime from now to within the next few months. This will put the chemical in the plant when the next generation of larvae begin to actively feed in the early fall. Imidacloprid has been shown to give multiple year control. One potential side affect of this insecticide is the outbreak of boxwood mites so watch for secondary boxwood spider mite outbreaks. Other labeled systemics should also give control but studies have not examined the duration of their control. A contact spray of Malathion, permethrin, pyrethrins+PBO, or tetramethrin is also effective when adult miners are present in April.

Boxwood psyllids are green, sucking insects that as adults look like miniature cicadas or large leafhoppers. They are also called jumping plant lice since their specialized hind legs enable them to spring into the air to take flight. Plants injured by boxwood psyllids show conspicuous cupping of the foliage. The damage does not seriously impair the health of the plant unless severe infestations persist over a period of years.

The boxwood psyllid overwinters as a nymph within the eggshell. Adults insert eggs between the bud scales during July and early August. Embryonic development takes place between then and fall. The nymphs emerge in mid-to-late April as soon as the buds begin to open. They feed on the new tender growth causing shoots and leaves to become deformed. Nymphs are green and produce white, waxy secretions. They remain clustered within cupped leaves until early June when adults first mature. One generation occurs each year. Common boxwood is the prime host. Severe infestation over a period of years causes serious damage. Occasionally English boxwood plants exhibit cupped foliage of a psyllid infestation but damage is rarely severe.

Effective control of psyllids can be achieved but some cupping of foliage will occur since nymphs begin feeding on new growth immediately after emergence. Treatments of acephate or Sevin should be applied as soon as new growth appears. Sprays later will kill the insects, but with little or no reduction in leaf cupping.

Several species of mites are known to feed on boxwood but the most injurious and common is the boxwood spider mite, Eurytetranychus buxi. Their damage is noticed when foliage becomes stippled with pinpoint-sized flecks. In severe cases all of the foliage may appear gray, bronzed, or chlorotic. They are most damaging to English and European boxwood, Japanese and Korean boxwood tend to be less susceptible to boxwood mite. You can check for these by rapping on the branches over a clipboard or other dark surface. The mites will be tan colored with relatively long legs.

These mites overwinter as round, greenish, flat-topped eggs on the undersides of the leaves. They hatch in April and complete a generation in 2 to 3 weeks. Several generations occur each year, accounting for rapid build-up of populations and extensive damage although they slow down in the summer heat. It is a good idea to apply control measures early in the season; however, miticides are effective if sprayed whenever the mites are found. The least toxic products are horticultural oil and insecticidal soap. Also consider acephate, Bayer 3-in-1, Pentac, Isotox (if it contains a miticide), Malathion, and permethrin.