As the leaves begin to fall things become apparent that are more hidden during the growing season. If you grow trees in the Prunus genus, and more specifically plum or cherry, you may be noticing a fungus among us commonly known as black knot. It appears as a black growth on branches and might remind you of an old horror movie called The Blob. Black knot is a common disease in Virginia on wild plums and cherries and in home orchards where pruning and spraying are not regularly practiced. 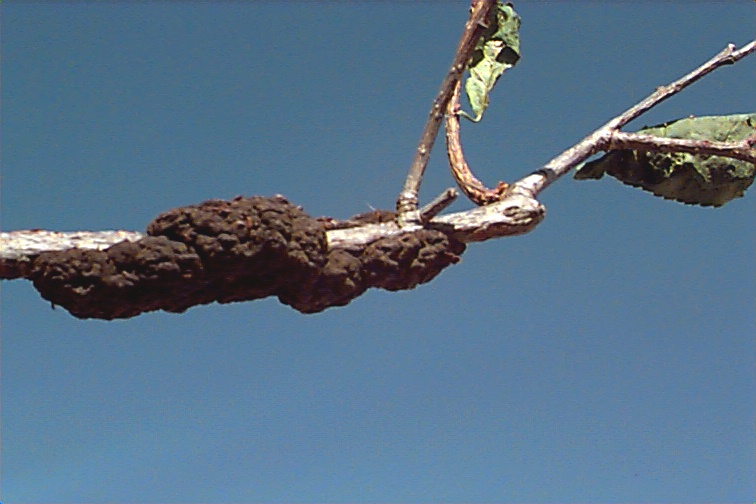 This fungal disease becomes progressively worse over multiple growing seasons and unless effective control measures are taken it can stunt or kill a tree. The black knot fungus mainly affects twigs, branches, and fruit spurs. Occasionally, trunks may also become diseased. Usually, infections originate on the youngest growth. On infected plant parts, abnormal growth of bark and wood tissue produce small, light-brown swellings that eventually rupture as they enlarge. In late spring, the rapidly growing young knots have a soft texture and become covered with a velvety, olive-green growth of the fungus. In summer, the young knots turn darker and elongate. By fall, they become hard, brittle, rough and black. This is the easiest time to see the fungus as it stands out in shape and color against the rest of the tree. During the following growing season, the knots enlarge and gradually encircle the twig or branch. The cylindrical or spindle-shaped knots may vary from one-half inch to a foot or more in length and up to 2 inches in diameter.

Small knots may emerge from larger knots forming extensive galls. After the second year, the black knot fungus usually dies and the remaining gall is invaded by secondary fungi that give old knots a white or pinkish color during the summer.

Smaller twigs usually die within a year after being infected. Larger branches may live for several years before being girdled and killed by the fungus. The entire tree may gradually weaken and die if the severity of the disease increases and effective control measures are not taken.

The fungus overwinters in knots on twigs and branches or in the infected wood immediately surrounding them. In the spring, the fungus produces spores in sacs contained within tiny fruiting bodies on the surface of the knots. These spores are ejected into the air during rainy periods and are blown for moderate distances by wind currents. Only succulent green twigs of the current season's growth are susceptible to infection. Spores that land on them may germinate and cause infection if the twigs remain wet for a sufficient length of time.

Normal growth is disrupted in the infected regions, and a knot is formed as the fungus causes the plant to produce tumor-like growths. Knots may become visible by the late summer of the year of infection but often are not noticed until the following spring, when they begin to enlarge rapidly. New spores capable of spreading the disease may be formed in the young knots the year following infection but often are not formed until the second spring. The fungus continues to grow in infected wood during the spring and fall months, causing the knots to elongate several inches each year and eventually girdle affected twigs and branches.

Spores are potentially available from the time of bud break until terminal shoot growth stops, but the greatest number appear to be released during the period between white bud and shuck split. Although the precise environmental conditions required for infection are uncertain, only a few hours of rain apparently are required at temperatures above 55 degrees F (13 degrees C), whereas much longer rainy periods are required to produce infection at temperatures below this threshold.

Resistant varieties should be used where possible.

When planting new plum trees, it is helpful to avoid planting trees next to or downwind from an old or abandoned orchard with a significant black knot problem. It is also a good idea to remove all wild plum and cherry trees from fencerows or woodlands nearby, as they are potential sources of the disease.

Trees can be examined each year for the presence of black knot. Infected twigs should be pruned out and destroyed. It is important to prune at least 2-4 inches (5-10 cm) below each knot because the fungus grows beyond the edge of the knot itself. If pruning is not possible because knots are present on major scaffold limbs or the trunk, they can be removed by cutting away the diseased tissue down to healthy wood and out at least 1/2 inch (1 cm) beyond the edge of the knot.

Fungicides can offer significant protection against black knot, but are unlikely to be effective if pruning and sanitation are ignored. The timing of fungicide sprays should be adjusted to account for inoculum levels and weather conditions. Where inoculum is high because of an established black knot problem or a neighboring abandoned orchard, protection may be needed from bud break until early summer. Where inoculum has been maintained at low to moderate levels, sprays are most likely to be useful from white bud through shuck split.

Fungicides are most necessary and will provide the greatest benefit if applied before rainy periods, particularly when temperatures are greater than 55 degrees F (13 degrees C). In evaluating control programs, remember that knots often do not become apparent until the year following infection.