Many of the calls we get these days ask for chemical-free alternatives for insect control. While there is no one method you can use to control all of the pest insects you encounter there are a number of things that can combine to keep insect pests at manageable levels. One of these things is attracting bats to your yard. Bats are the main predators of night-flying insects. These nocturnal flying mammals can eat thousands of insects each night and can be an important tool for insect control. 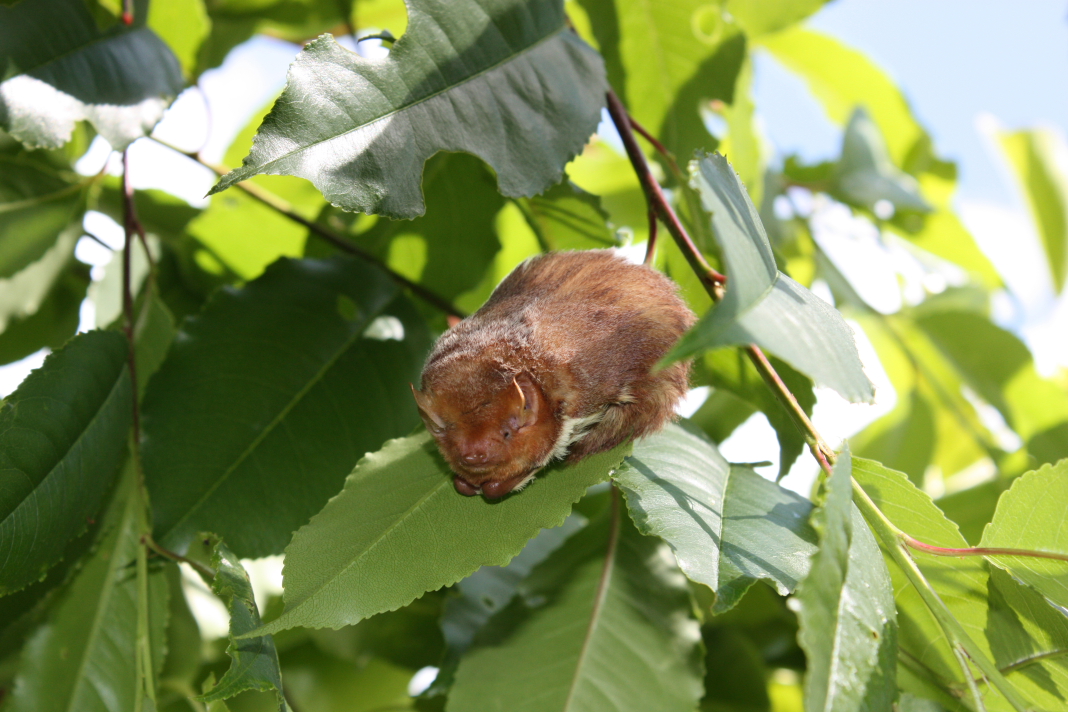 Bats are the only mammals capable of true flight. Their wings are like hands with skin stretched between modified finger bones. They are not blind, but rely on echolocation instead of their eyes for locating and capturing food at night. Bats are more closely related to primates than the rodents with which they are often compared. They have slow reproductive rates with typically only one offspring cycle. Like all other mammals, female bats nurse their young. Of the 43 species of bats in the United States, 15 species of bats are found in Virginia. Many of these species use bat houses.

Due to many years of unwarranted human fear and persecution, bats are in alarming decline. Some species are officially listed as endangered and others are not far behind. By putting up a bat house not only will you help bats find a home; you will also benefit from having fewer yard and garden pests. You can learn about bats by observing their behavior and share your knowledge with friends and family. Bats also serve as important pollinators of many food plants.

There is no known way to attract bats to a bat house. We can only hope the bats will like it and move in. Bats need a water source so houses located within half of a mile of a permanent source of water, especially a marsh, lake, or river, are more likely to attract bats. Place your bat house at least 10-15 feet high, facing southeast or east, and sheltered as much as possible from the wind.

Internal temperatures may control how and whether your bat house is used. You should consider several factors before mounting a house. Bat houses intended for use by nursery colonies should be oriented to receive maximum sun, especially in the morning. They also may benefit from having the roof painted black. If your bat house is too cool for a nursery colony, you may still attract bachelors.

During the warm months, female bats normally prefer stable temperatures of 80-90 degrees F, although some bats tolerate temperatures in excess of 120 degrees F. Nursery colonies may include one or more individuals in a bat house. Male bats do not live with females while young are being reared.

Your bat house may or may not be used during the first year. If your bat house is not occupied by the second year, try moving it to a warmer or cooler location. Chances of early occupancy are probably increased if houses are hung by early April. Occupancy rates are also increased if bats already live in barns or attics in adjacent areas. In some areas heavy use of pesticides, a lack of hibernating sites, too great a distance to feeding or drinking sites, or even an abundance of existing roost sites may preclude occupation of your bat house.

Bat houses can be made from cedar, cypress, or pressure-treated pine lumber to insure durable boxes. Front doors can be built to pivot at the bottom on two nails, allowing access for cleaning should birds nest in it before bats inhabit it. Houses should be made of rough lumber or have all inner surfaces and entrances roughened. Rough surfaces allow bats to move around or attach themselves to the surface. Another alternative is to cut shallow grooves, or attach fine plastic or mesh wire to the inner surfaces of the box so bats can easily crawl up and into the house. Avoid painting or varnishing the inside of the house but it is good to paint or cover the roof and the top four inches of the sides with tar paper or another dark material to insure the high temperature ranges required by both young and adult bats. Seal all seams with silicone caulk to waterproof houses and prevent heat and moisture losses.

It is important to consider what bats need to increase the chances of successfully attracting them. Bat houses, like birdhouses, are designed with their potential occupants in mind. It is a good idea to use a design that is known to work if you plan to build your own. Some resources for bat houses and bat house designs can be found on the World Wide Web. Designs are also available from the Virginia Department of Game & Inland Fisheries and the Virginia Department of Forestry.