Often when I teach people about insects I am asked what is my favorite insect. Although I have trouble choosing one over another because they are all so loveable I usually, when pressed, choose the assassin bugs as a group and the wheel bug as my favorite. 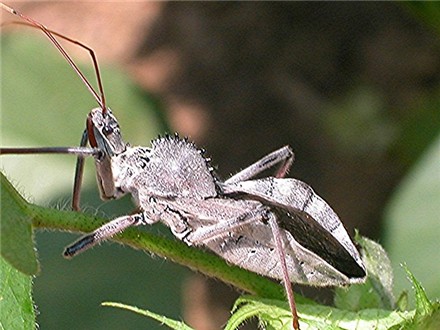 A photo of a wheelbug.

Assassin Bugs are in the order Hemiptera or Heteroptera (depending on which textbook you prefer) sometimes called the true bugs. This order also includes stink bugs, pirate bugs, and big-eyed bugs among others. All insects in this order share a few characteristics, including piercing-sucking mouthparts, and wings which are membranous at the tips, but hardened at the base.

Like all members of the true bugs, assassin bugs go through a simple metamorphosis with egg, nymph, and adult stages. In warm months, females lay eggs which are stuck in clusters to leaves and stems. After hatching, the wingless nymphs grow and molt 4 to 7 times (depending on the species) before becoming full-sized, winged adults. Adults are usually the overwintering stage. Most members of the family Reduviidae are predators. The nymphs and adults capture insects and other arthropods with their raptorial front legs, much in the same way that an avian raptor uses its talons to capture prey. Assassin bugs then use their sharp beaks to suck fluids from their victim. They also may inject a small amount of poison that paralyzes their prey, making it easier to handle.

Assassin bugs actively hunt for prey. In general, assassin bugs hunt on various types of vegetation, including trees, weeds, and bushes although they can be found on structures such as houses where insect prey, wasp nests for example, are found. Assassin bugs are able to fly, but they are poor fliers.

A few species in this family are parasites that feed on the blood of mammals. The bloodsucking conenose or kissing bug, Triatoma sanguisuga, is a common example. It normally feeds on rodents, but will sometimes bite humans that sleep near rodent nests. They are called kissing bugs because they often feed near your mouth.

As you might imagine, bugs in the family Reduviidae are considered pests when they bite humans. Common predatory assassin bugs, like the wheel bug, will occasionally inflict painful bites if you pick them up but they do not commonly attack humans except in defense. For the most part, assassin bugs have reputations as beneficial insects because they feed on other arthropods.